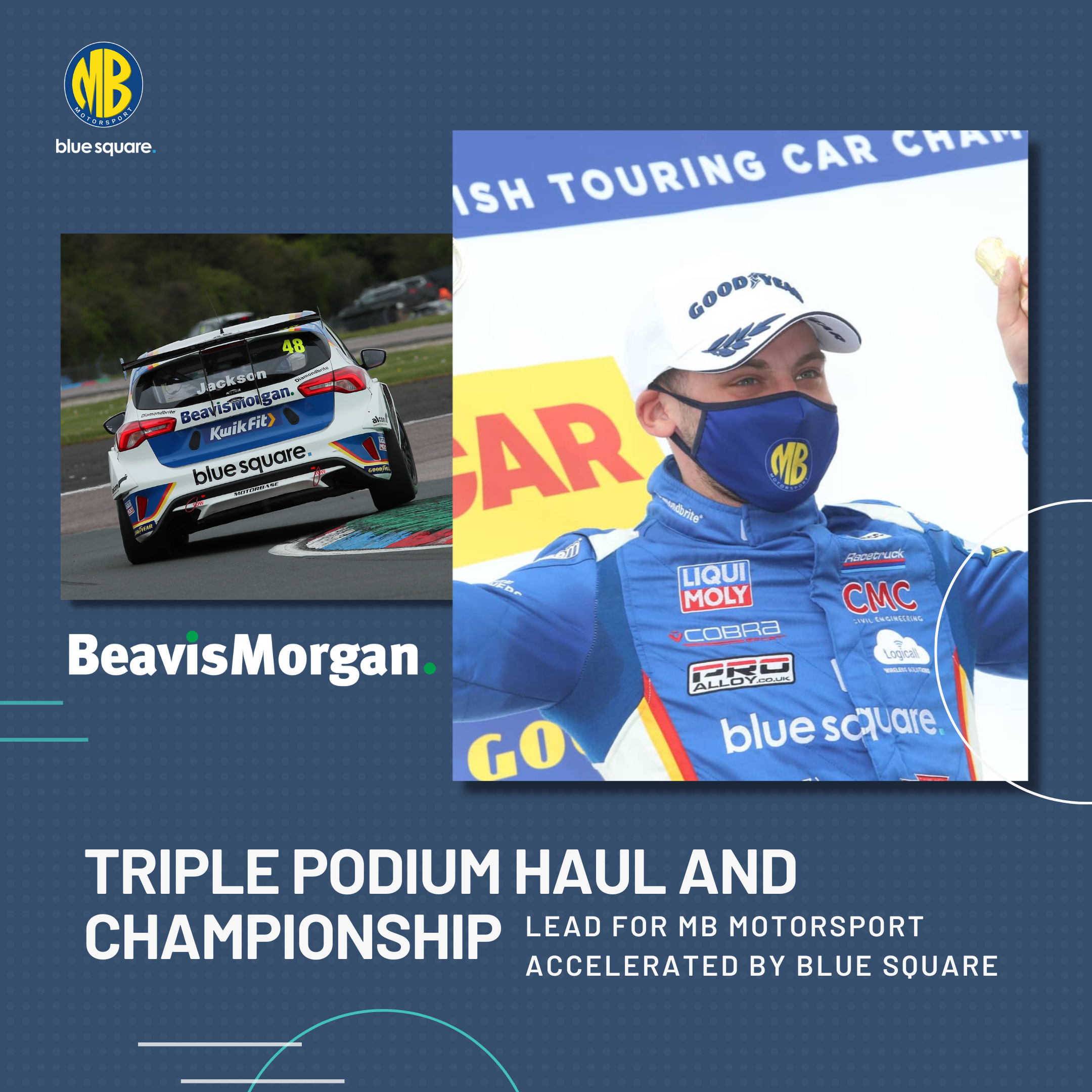 ‍MB Motorsport accelerated by Blue Square enjoyed a fantastic day of racing at Thruxton with Jake Hill securing three podium finishes from three races, Ollie Jackson achieving a top ten, and the team and the Motorbase Performance squad leaving Hampshire with the lead of the Drivers and Manufacturers Championships, thanks to three successive Manufacturer victories.‍

With much more settled weather conditions compared to Saturday, the Beavis Morgan sponsored team were confident that Sunday could provide all the ingredients needed for a successful day’s racing on the first day of the Kwik Fit British Touring Car Championship. Lining up seventh and ninth on the grid respectively for race one, both Jake and Ollie looked forward to making their way through the field.‍

As the opening race of the season got underway, drama quickly ensued with Ash Sutton sent pirouetting out of the lead by Colin Turkington, allowing Jake and Ollie to carve their way through the chaos and climb the order. Jake continued to gain places on the opening tour, capitalising on a spinning Tom Oliphant and passing Rory Butcher’s Toyota in the process.

Ollie’s progress was abruptly halted after being hit by Gordon Shedden’s Honda, with the Scottish racer also taking out EXCELR8’s Chris Smiley in the process. Ollie was then forced to pit under the safety car to clear the radiator. Fortunately, the two-time race winner was able to rejoin the race albeit at the back of the field.

When the race resumed, Jake had climbed to the podium places in third and staged an excellent performance to keep the BMW of Turkington at bay for the remainder of the race to register his first visit to the rostrum in 2021. Meanwhile, Ollie fought back through the order to finish P19 on the road.‍

A dramatic start saw the second race immediately red-flagged following a multi-car collision in the midfield, necessitating extensive barrier repairs and a large clean up operation. On the restart, Jake and Ingram were caught off the line and lost ground to Cammish, Butcher and Plato. In the #24, Jake quickly repassed Plato before regaining third place after Butcher spun off the road. From there, he kept in touch with the two BTC Racing Honda’s of Cook and Cammish and recorded his second podium finish of the weekend.

Meanwhile, some decisive driving from Ollie allowed him to avoid the midfield chaos and carve his way through the field and get involved in a series of close battles. Closing in on the top ten, the #48 finished in P13, narrowly missing out on the top-twelve reverse grid pole lottery.‍

The notorious British weather soon played its part in proceedings as rain began to fall shortly before the start of race three. Tyre choices soon became the key call for every team on the grid, with variations beginning to emerge. The majority of the field opted to run the wet Goodyear tyre whilst MB Motorsport accelerated by Blue Square split their individual strategies, with Ollie running the wet from P13 on the grid and Jake running the slick tyre from P9.

The first phase of the race particularly suited the wet runners with Jake dropping to 19th and Ollie making a storming progression through the field early into the top six. As the conditions swung the other way, Ollie held firm excellently in tricky conditions to register his first top ten finish of the season, completing a stunning recovery through the field.

In true BTCC fashion, the pendulum duly swung back towards the slick runners with the rain easing and the track beginning to try once more as the race reached the midway point. As a result, Jake began lapping up to five seconds faster than the race leaders and set about dicing his way back through the order. With five laps remaining, he’d blitzed his way past polesitter Sutton and into the lead of the race.

Once again, the rain increased in intensity and the momentum shifted away from those on slicks and back towards those on wets. Fending off the charging Sutton and Plato as hard as he could, Jake was powerless to stop the pair from demoting him to third place at the chequered flag.

The results mean MB Motorsport accelerated by Blue Square helped Motorbase Performance Ford to complete a hat-trick of manufacturer victories and head to Snetterton on June 12/13 leading the Manufacturers Championship ahead of BMW and Toyota.

Jake Hill, meanwhile, thanks to a hat-trick of podium finishes leads the Drivers Championship for the first time in his BTCC career after a memorable day.

“It was taken out of our hands in race one, and as frustrating as that is, we have worked really hard as a team to recover with two points finishes and a top-ten in race three. Obviously the first race set the tone for the day and gave us a lot of work to do but we knuckled down and made the progress we needed to. The car felt really good and I think we made more progress through the field, than any other front wheel drive car which is a great sign.

“I enjoyed a few battles here and there throughout and was pleased to get myself into the top ten in race three. It’s been a great start to the season for the team so I can’t wait to push for more at Snetterton.”‍

“I’m over the moon with our performances. We knew we had a good race car underneath us and the team have done an amazing job in getting it to this point. The win looked possible in the last race, but the conditions just went a bit too far to hang on to it.”

“There has been so much work gone into everything behind-the-scenes over the off season by so many – I’m just delighted that those efforts have been rewarded. To leave Thruxton with the lead of both championships is just brilliant and I cannot wait for Snetterton to come around.”‍

“I think we can call that a very successful first day back at the office. Both Ollie and Jake did themselves proud, as did the whole Motorbase Performance operation which was faultless from minute one.”

“Ollie has had to battle through the hard way but made his way through the field excellently and we know that he is getting on with the car brilliantly. For Jake, I’m really pleased for him. After the start we had last year, we couldn’t feel any more different than we do after Round One and he drove excellently. That was some performance particularly in race three, with changing conditions, but we can head to Snetterton in confident mood and ready to build on this weekend.”

Congratulations from all of us at Beavis Morgan to Jake, Ollie and all the MB Motorsport team on a fantastic opener to the season. Let’s carry this momentum forward to Snetterton – 12-13 June.