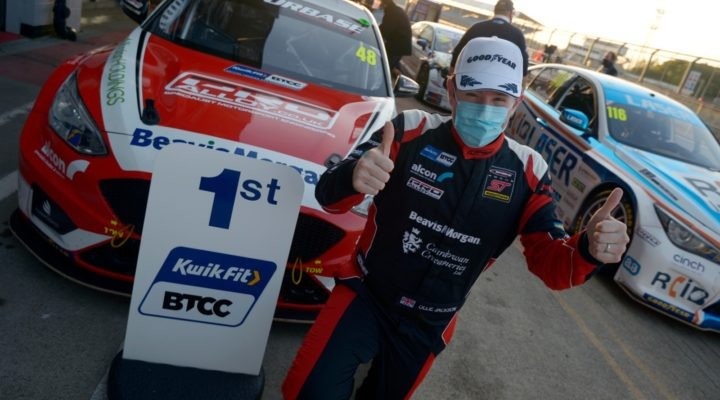 MB Motorsport accelerated by Blue Square (MB Motorsport) is thrilled to announce that multiple BTCC race-winner Ollie Jackson will complete their 2021 driver lineup. And we will be right behind him, as Beavis Morgan proudly confirms our continued sponsorship of Ollie this season.

Ollie joins the team fresh from his most successful season in the Kwik Fit British Touring Championship (BTCC) to date, claiming his maiden victory in the series at Silverstone before going on to triumph at Snetterton in the penultimate round of the 2020 campaign.

A familiar face in the BTCC paddock, BRDC member, Ollie first competed in the BTCC back in 2011 and since then has transformed into a regular points scorer – finishing in a career-best 12th place in the Drivers’ Championship with Motorbase Performance last season.

At the wheel of the Ford Focus ST during his multiple race-winning campaign last season, Ollie’s knowledge and experience of the car will prove invaluable as the team looks to hit the ground running with its new machinery. Thanks to the team’s technical partnership with Motorbase Performance, Ollie is well-placed to build on the successful relationships already established in his 2020 campaign.

Excited to build on the momentum of his success last year, Ollie can’t wait to get the season underway.

“I’m over the moon to be racing with MB Motorsport accelerated by Blue Square this season,” Ollie said. “Last year was a really memorable one for me and I’m determined to build on that this year. I got on really well with the Ford Focus ST and now have the opportunity to take that success to another level in 2021.

“I’m also really pleased that the makeup of the team will allow me to continue working with the majority of the personnel from last year as well as working with Shaun once more who helped me win my first podium back in 2018. We’ve a great relationship and with his and Mark’s leadership, I’m certain we’ll have a lot to smile about in the year ahead. It’s an exciting time!”

“It’s fantastic news to have Ollie join us this season. I’ve seen first-hand just how talented he is behind the wheel and I’m very pleased to have him back in one of my cars. His knowledge of the Ford will help drive us forward and, between him and Jake, I’m quietly confident that we’ll have a very memorable season.”

“As a team, we’re incredibly excited to take another step forward this season. Ollie’s signing forms a big part of that and is a statement of intent for the whole team. Last year was a real standout season for Ollie and his signing is another big part of the jigsaw falling into place. His experience and success is a major boost to the team and we are looking forward to working with him.”

“We are delighted to announce our continued sponsorship of Ollie Jackson. He has shown huge dedication and commitment to the sport over the years, always striving to produce his best on-track performance, and to not rest on his laurels by continuing to build on his previous successes.

“Ollie is a tremendous ambassador for Beavis Morgan and a good fit with our brand. We thoroughly enjoy our partnership with the sportsman who demonstrates a fighting spirit, a progressive approach, resilience and strong values, both on and off the track. We wish Ollie and the MB Motorsport accelerated by Blue Square team all the best for an excellent performance in the forthcoming 2021 BTCC season.”

The opening rounds of the 2021 British Touring Car Championship take place on 3-4 April at Brands Hatch (Indy). The full BTCC calendar can be found here.