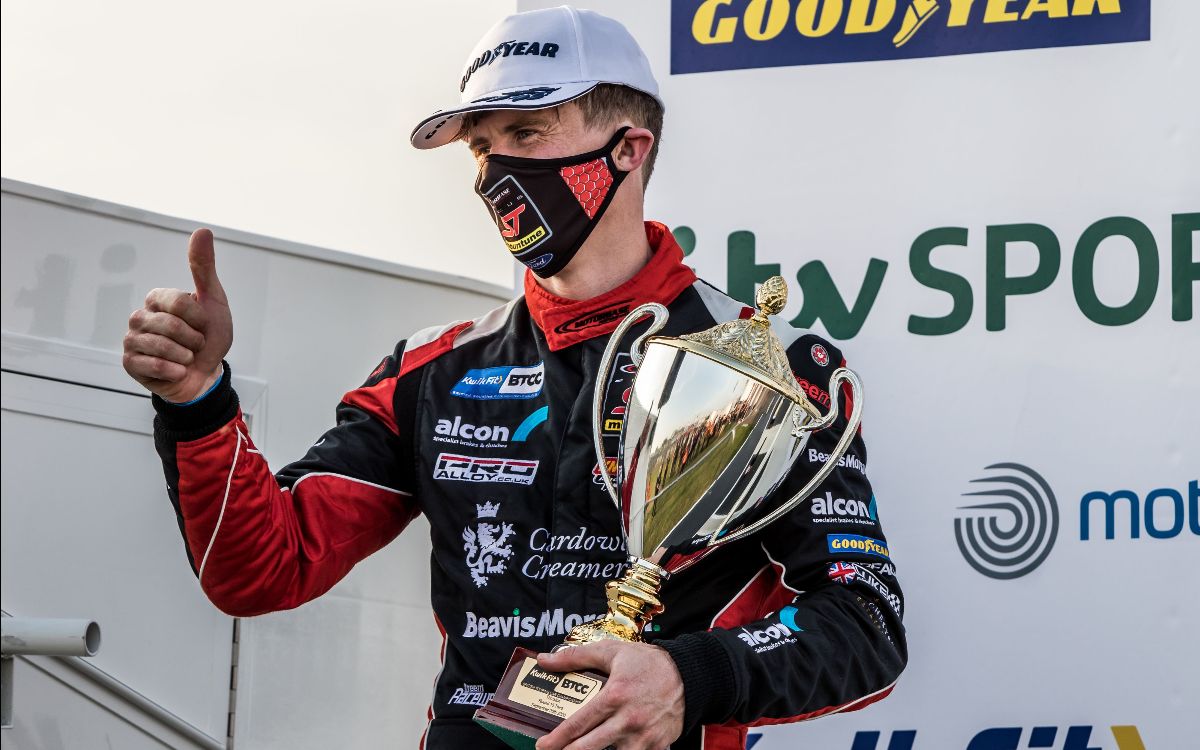 The Beavis Morgan sponsored Motorbase Performance team kept up its record of collecting trophies in the chase for this year’s Kwik Fit British Touring Car Championship and driver Rory Butcher is in the heart of the title battle after another rostrum finish at Thruxton last weekend.

Rory’s spirit was remarkable as he took the brand new fourth-generation Ford Focus ST to a third-place finish in the final race in Hampshire as the crew looks ahead to the next three races at Silverstone this weekend. Butcher is right in the thick of the points chase in fourth position.

The daunting high-speed challenge of Thruxton is one that is relished by all drivers, but the unique demands of the circuit are unique. In a usual season, teams would have the opportunity to test their hardware at the 2.36-mile layout first, but lockdown measures meant most crews went into last weekend’s three races with very little data in the bank.

Engineers on Motorbase’s brand new Focus were on a learning curve but both Butcher and team-mate Ollie Jackson scored points in each race in a superb return for the two-litre turbocharged hatchback.

Rory said he was delighted with the learning process both he and the Motorbase Performance team went through over the course of the weekend on the notoriously demanding track. He lined up in sixth spot on the grid for the opening event and battled to a sixth, fifth and then a third place.

The flying Scotsman said: “We have arrived at certain tracks and we have not even changed a rollbar from the opening practice session through to the end of qualifying, the car has been that good, but we had never been to Thruxton before and it was a huge learning curve. We gathered a lot of data which will only help us when we come back to this track.”

The work going on in the background helped Rory, the reigning Independents Trophy holder, to sign off the weekend with high, and he is full of optimism looking ahead to Silverstone’s races on Sunday.

“We came away with strong finished in all of the races and I was delighted with the podium in race three, especially as I was under pressure from Ash Sutton all through the way through race, and he is a guy you don’t want hunting you down,” added Rory.

“Thruxton was an important day, but now we head to the next challenge. Silverstone is much more like the circuits we have been to previously; the surface is similar to other circuits and it is a much more generic track. I think we will slot right in at the sharp end there.”

Ollie Jackson, also a podium finisher for Motorbase Performance this season, was ruing a tough qualifying session which meant he lined up on the eighth row. However, he made progress in the opening race to climb to 14th on the tough-to-pass speed bowl, and he matched that performance in the second race of the weekend.

He climbed up the order to 13th in the reversed grid finale and he too now has his sights set on this weekend’s showdowns at Silverstone, the home of the British Grand Prix.

He said: “It was a bit of a funny weekend and I should have done better in qualifying really. It is always really hard to overtake at Thruxton but, nevertheless, I was hoping to make up a bit more ground than I was able to in the three races.

“But that meeting is done and we are looking forward to Silverstone now,” he added. “Given how the car has gone already this year, the indications are that we will be in for a strong weekend and I am definitely glad to have ticked Thruxton off. We can reset and look forward now.”

Motorbase Performance team principal David Bartrum said that he was pleased with the way the engineering brains at the squad had performed over the weekend in Hampshire and said he is full of optimism for this weekend’s battle at Silverstone.

“What a great drive from Rory in race three to take his podium,” said David. “It was a fantastic race and it looked great on television. It was a good clean event with no pushing and shoving.

“Overall, though, it was a tough weekend and that sometimes happen when you have a brand new car. There was no testing at Thruxton so we had not seen the place with our new Focus. It is completely different to the old car and there are only two 40-minute free practice sessions to try and unlock all of the pace from it. Given that fact, we were delighted to get a podium and the points we did.

“Silverstone is next and that is a circuit we like. It should suit the Focus, and so we will go there with our tails up and hope to build on the progress we have already made.”

The next rounds of the 2020 Kwik Fit British Touring Car Championship take place on Sunday, and will be shown live on ITV2. The opening race is scheduled to start ay 1127hrs.