Home BTCC Motorbase on the top step again at Snetterton 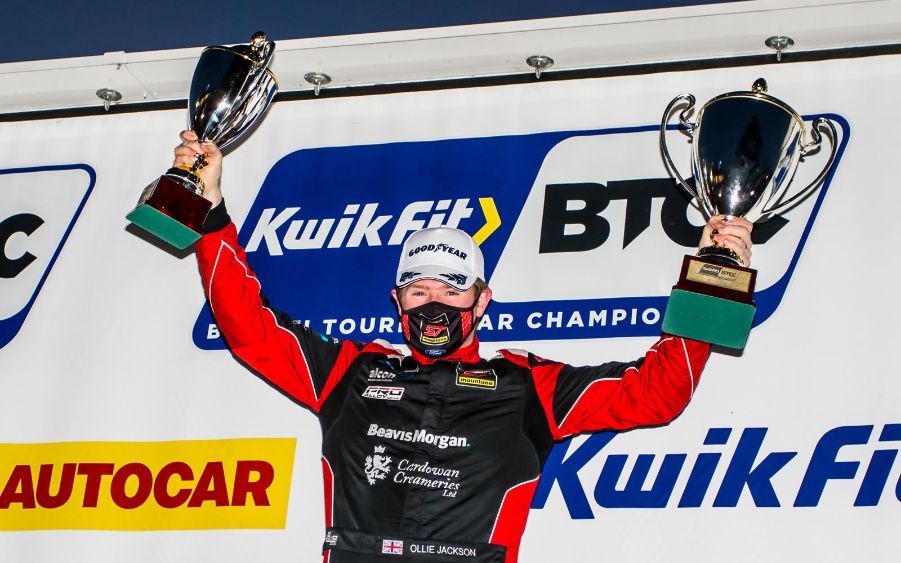 Race winner Ollie Jackson has heaped praise on his Motorbase Performance British Touring Car Championship after powering to his second victory of the campaign at Snetterton last weekend.

The Beavis Morgan sponsored Ford Focus ST driver withstood huge pressure in the final race of the day in Norfolk to bank his second triumph of the season as he closes in on a best-yet top 10 finish in the points standings with only three races of the 2020 campaign remaining.

His performance was all the more impressive after he was the innocent victim of a race-one shunt which meant he had started the second race of the afternoon on the 11th row of the starting grid.

One of the drives of the season meant he was able to climb up to an astonishing eighth place, which put him on the front row for the reversed grid final encounter. Once he had wrested the lead on the opening lap, Ollie didn’t look back to claim the champagne. He was under attack throughout the 12 laps but held his nerve to back up his maiden career win at Silverstone in late September.

“It feels as though wins are like busses: two come along at once,” said Ollie afterwards. “It’s brilliant and l’ve soaked it in a bit more this time. It’s absolutely fantastic to have another great result.

“I didn’t think it was going to happen after getting knocked back on the opening lap of race one and I pretty much started from the back in race two. I’m really grateful for the team and the car that we had the pace to pull the weekend around.

“The goal before three was to get the good start and lead by the end of the first lap. I got the good start and I made my way past [polesitter] Chris Smiley and it looked like Adam Morgan [who was chasing] was struggling in the Mercedes with the back end and I took advantage of that and sneaked through and held it.

“I think I might have mastered the art of launching a touring car now after picking up 10 spots in two laps in race two. The car has made it happen this weekend, it’s such a fantastic bit of kit.”

Alongside Ollie, Motorbase man Rory Butcher had a successful weekend bagging strong points in all three races to keep himself in the hunt for the championship top three. The Scotsman claimed two fourth-placed finishes and a fifth spot in a solid weekend.

Despite those results, Rory thinks there was even more to unlock from his pace, and a collision in the third race of the weekend wiped out his hopes of making it a double podium for the Motorbase team.

Rory said: “We’ve had two rounds on the bounce where we have lacked in the points department and we’ve had some misfortune. We definitely had a pacey car this weekend and I wanted some silverware but that didn’t happen.

“It was great to see Ollie leading race three and I was trying to put pressure on Adam Morgan in second so that I could overtake him and to also take some hear off Ollie so that he could get away. It would have been lovely got a podium as well. Ollie has made the team happy and it is great points for us.”

Team principal David Bartrum paid tribute to Ollie’s comeback in race two, which he said set-up the victorious run in the finale.

“Ollie has driven brilliantly,” he said. “He had the bad luck in race one and he ended top getting punted so he has had to come through the pack. To get up to eighth position in race two has set the scene for the win. That drive in race two is arguably a better drive that he produced to win two.

“To get back to eighth to be in the draw and then to go from third off the line to first and win the race – he has not been gifted that, he’s won it from the way he has built his weekend. I’m over the moon for Ollie. I think this is one of his most complete weekends as he has qualified well and raced well.

“However, it is disappointing as I expected a bit more from Rory. Two fourths and a fifth is what it ended up, but it should have been a double podium for us. They are still good results and if someone had said to me one of my drivers would win and everything in the top five for the other car you would be over the moon with that.”

The final rounds of the British Touring Car Championship will take place at the Motorbase Performance team’s home circuit of Brands Hatch on November 14-15, and the entire event will be broadcast live on ITV4.

Well done to Ollie and the team on an exceptional performance and all the best for the final race of the season.