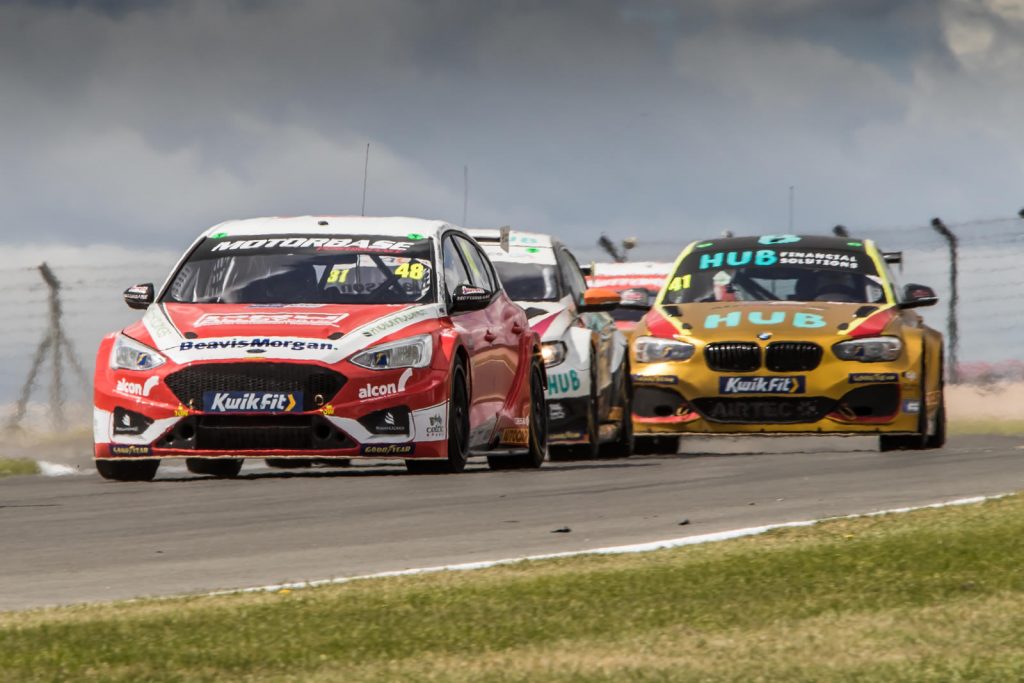 The Beavis Morgan sponsored Motorbase Performance team has positioned itself as a title threat after three stunning races for its new fourth-generation Ford Focus during the opening rounds of the 2020 Kwik Fit British Touring Car Championship at Donington Park last weekend, and the crew is on the front foot for this weekend’s second encounter at its home track of Brands Hatch.

Drivers Rory Butcher, Ollie Jackson and Andy Neate took to the Donington circuit for the opening three encounters in the 27-race contest. Two superb podium finishes from reigning Independents Trophy holder Rory means he is in the heart of the points chase and he is equal third in points chase.

Ollie, meanwhile, was the first man to lead a race in the brand new car with a superb performance in the third race of the day and collected two significant points hauls, while BTCC returnee Neate continued his learning in the two-litre turbocharged hatchback and saw the chequered flag in all three showdowns.

Rory says that he was highly optimistic after experiencing the car in race trim for the first time. The Scotsman said: “There was a lot of pressure on myself and the team, but it is pressure we put on ourselves. We wanted to hit the ground running. We had to work away at the set-up after qualifying, but we got the car strong for the races and that reaped rewards.

“The pace of the car, particularly in the opening stages of the races, was very encouraging and when we were saddled with success ballast in races two and three, I think we proved that we have a superb car underneath is. Being able to pass the factory Honda of Dan Cammish in race two was a real high point.

“I hope we can hit the ground running again on the Brands Hatch Grand Prix track this weekend. It is one of my favourite circuits and I want to exploit every chance I get. I am not thinking about points yet, just getting the maximum I can from every session. If I do that, I will be in in the mix at the end of the year.”

Fifth place in the final race of the weekend – after a strong run from the front row – also delighted Ollie. He had worked hard with his engineers across the qualifying session and the opening race to unlock some of the handling secrets of the front-wheel-drive car and is keen to put those into practice at Brands Hatch this weekend.

“The car’s pace was clear, and we have done a huge amount of learning already,” says Ollie. “We made some changes to the car after the first race and it really clicked. After that, we were making tiny alterations and it felt really strong.

“Seeing what Rory did with the car and knowing that I now have a good direction to go in, I can’t wait for Brands Hatch this weekend. It is a fast track with lots of technical sections and it is one of my favourites of the year.”

Team principal David Bartrum says he was delighted that all three of the machines ran trouble-free across the weekend and is looking forward to building on the learning that the team has already done when the field reassembles at Brands Hatch this weekend.

“First, it was very strange to go to a race with no fans, no gridwalk, no spectators – it really affected the atmosphere and it showed just how important it is to have enthusiasts enjoying the racing with us,” says David. “Having said that, the BTCC organising team did a great job in keeping us all safe and getting the ball rolling again.

“There were so many positives to take from our on-track performance. There were no issues with the cars at all. When you go to round one, it is like the first day of school: you are catching up with your friends and you are eager to see where you are in the pecking order.

“We knew from testing that the car was strong, but it was great to see where we stack up compared to everyone else. Rory was a star and showed that we have race-winning potential almost straight away, and Ollie was knocking hard on the door of a major result. Andy too did a great job, got rid of some of the cobwebs and has really increased his understanding of the new Focus.

“It is our home race at Brands Hatch this weekend on the full grand prix track, which I am delighted that we are doing in August rather than at the end of the year. If we can maintain our momentum, we will look forward to strong results from all three drivers again.”

The second meeting of the 2020 Kwik Fit British Touring Car Championship takes place at Brands Hatch and will be broadcast live on ITV4. The opening race on Sunday kicks off at 1050hrs.

We wish Ollie, Rory, Andy and all the Motorbase team all the best for a successful weekend on their home track.