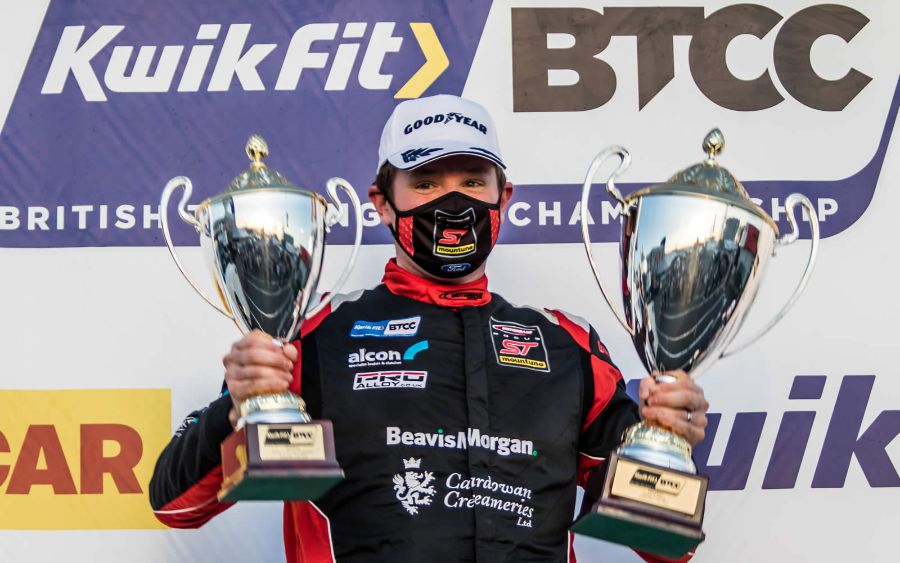 Scotsman Rory was quick to praise the build quality of the fourth-generation Ford Focus ST after his horrifying accident, which caused him to barrel roll out of the weekend’s finale when he was battling to climb inside the top eight.

Rory’s weekend had kicked off with a podium finish in the opening event under stern pressure from his rivals to land his seventh rostrum position of the campaign so far. He was shunted down the order in race two but was looking to bounce back in the reversed-grid race three before the incident occurred on lap six.

He was able to walk from the car unaided and was quick to reassure fans, who had witnessed the drama unfold live on ITV2, that he was unharmed in the spectacular crash.

“The car kept me so safe in the impact, and I am thankful for that,” says Rory, who is fifth in the chase for this year’s title.

“I am grateful to everyone who has been in touch and I am absolutely fine. Myself and [Honda Civic Type R driver] Matt Neal were side-by-side going down to the Maggotts-Becketts complex of corners and there was a bit of contact between the two of us and I spun round. I hit the barrier pretty heavily which put me up into the roll.

“I am just gutted for the team, which has worked so hard. It is a big repair job for everyone now, but we will come back stronger from this when we get to the next round at Croft (October 10-11).”

Rory says that the performance of the two-litre turbocharged hatchback in that final race of the weekend before the crash has left him with some optimism going forward.

“We did get a podium from race one, and the car was also super-fast in race three before the incident,” says the 33-year-old. “There is plenty of positivity we can take forward to the next meeting.”

While Rory’s weekend ended abruptly, team-mate Ollie Jackson was left with the biggest grin in the paddock after he prevailed in a tense race three. He led initially until the race was stopped for Rory’s accident and he made another perfect getaway at the second time of asking in the restarted round to power to his maiden triumph.

“I would say that win was long overdue,” jokes Ollie. “It was a brilliant day, and now I have the monkey off my back.”

Ollie had scored solid points in the opening two races before claiming pole position for the reversed-grid race three. He withstood a stern test from the rivals in his wheeltracks but held his nerve to the chequered flag.

“I was under pressure from some drivers behind, but I could smell the win,” adds Ollie. “I had been in that position before and maybe would have been satisfied with a podium, but I was not going to let that chance of a win pass me by.

“Obviously it was a tough weekend for the team with Rory’s accident, but hopefully I have given them something to smile about when they are going through the hard work to get us ready for Croft.”

The third Motorbase Performance Focus driver, Andy Neate, was caught up in incidents in all three of the races in Northamptonshire. He was able to see the flag in two of the three rounds but was ruled out by contact in the weekend’s finale.

Motorbase Performance team manager Oly Collins says that the crew would be working hard in the next week to prepare the cars for the next stop on the BTCC schedule.

“What a weekend Silverstone was,” he says. “The most important thing is that Rory is fine and managed to walk away from what was a pretty massive accident, so the car did its job in that respect and that is credit to all involved in the design and build of this machine.

“Up until that point, we had been happy with the pace. Carrying success ballast weight all weekend takes its toll, so when it was removed, Rory had good pace. He was looking strong for a decent points score in race three after the disappointment of being taken out of race two before the shunt.”

He says that Ollie’s first BTCC victory was one that the driver and the team could be proud of, particularly given the way it was achieved.

“On the other side of the garage there was a totally different story going on,” added Oly. “I’m so pleased for Ollie and the whole team involved – this has been coming for a long time and he really deserved that.

“He drove a faultless race, kept his head and gave the team a mega result which we needed.

“Andy Neate, unfortunately, had a tough weekend. He was involved in incidents which weren’t his fault which cost him any chance of a result on Sunday and sustained a lot of damage in the race-three incident.”

The seventh meeting of the 2020 Kiwk Fit British Touring Car Championship takes place at the demanding Croft circuit in North Yorkshire on November 10-11 and each of the three rounds will be shown live on the ITV network.

Well done to Ollie and the team on your win and good to know that all is well with Rory, despite that horrible accident. We are very proud to stand alongside you all as your sponsor for many years. All the best for Croft.